A photographer, a lake, a dream: giving new life to images. 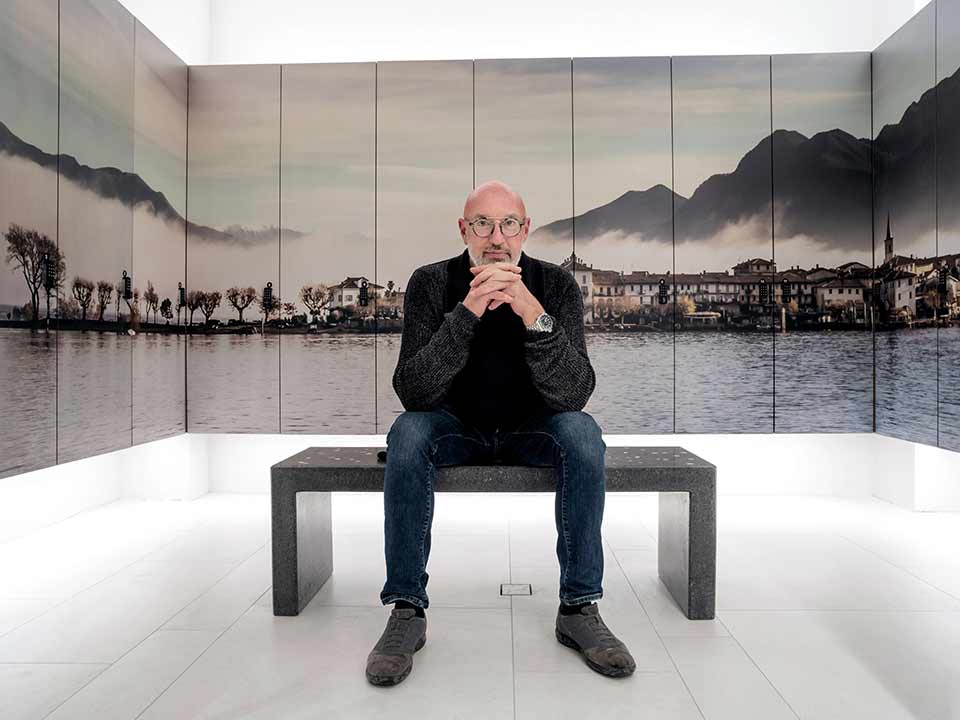 The photographer Walter Zerla, surrounded by his photo panels made with Roland LEC2 S flatbed UV printer for an exclusive spa in Stresa on Lake Maggiore.

We met Walter Zerla in his studio in Omegna in Piedmont in north-west Italy. His glamorous, minimalistic look quickly outs him as a perfectionist, particularly when it comes to the creation of images of quality and significance. Walter Zerla is an internationally renowned professional photographer boasting an outstanding career in advertising, fashion and design. When asked about his inspirations for his extraordinary photography, he said:

“I'm lucky enough to live in a wonderful place, between Lake Orta and Lake Maggiore. My images speak of this: of my region.” 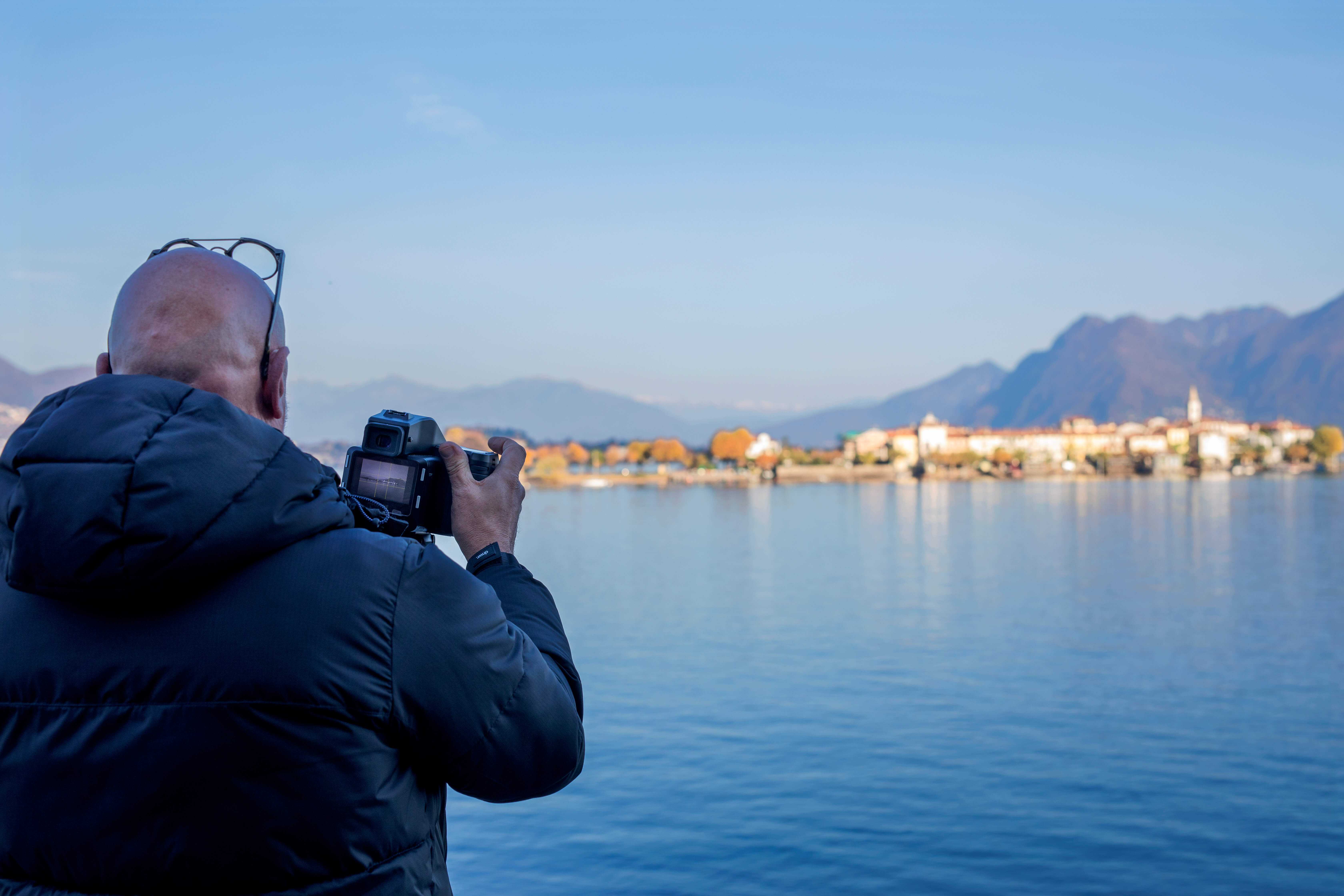 The photographer at Lake Maggiore while capturing a snapshot of his region.

Walter's vision is one of vivid and visceral photography. He aims to capture the physicality of the image, which, in a world that is becoming more and more oriented towards the virtual, is a dying art. From this point, he came up with the idea of printing his photographs directly onto new materials, opening up a world of experimentation through digital printing. However, especially at the beginning, he had hesitations, questioning:

“Is it possible for an image printed directly onto a material to faithfully reproduce the tones and the depth of the colours as well as an image printed on paper and then applied to the material?”

So, he did some research and became fascinated by the world of UV printing. After evaluating several brands, he found a solution that allowed him to achieve the results and the emotional effect that he wanted: the Roland VersaUV LEC2-640S-F300. One of the features that the photographer most appreciates about this S-Series UV printer is the very high-fidelity colour reproduction, the level of detail and the colourimetry. 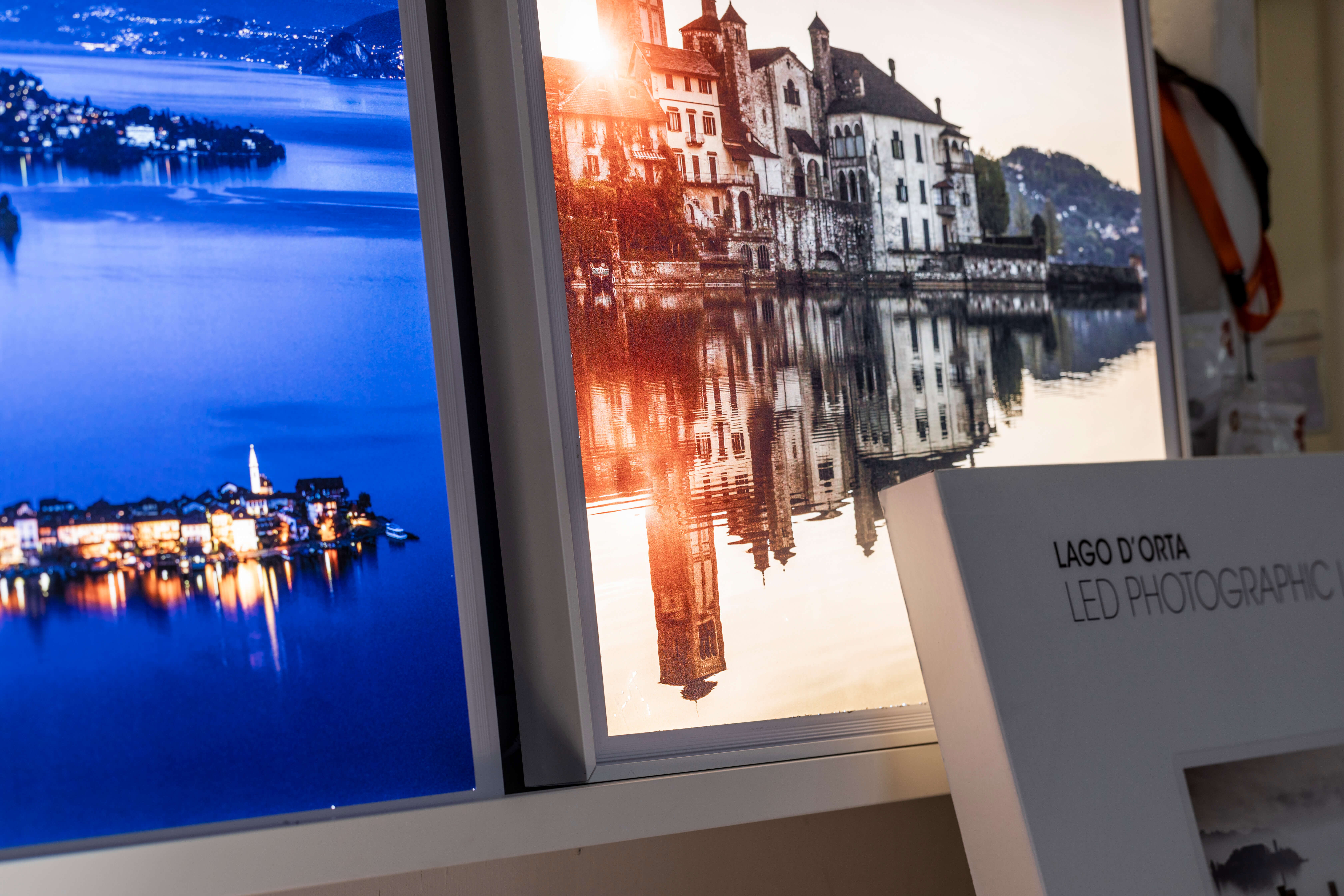 “We give new life to the images with this splendid layer of ink. These images have become living objects again.”

This is achieved with the combination of the CMYK, orange and red EUV5 inks included with the printer, featuring first-class pigments for uncompromising reproduction of tonal transitions and colour ranges. The device that Zerla chose has allowed him to expand his range of products and create new applications: backlit prints, large-format canvasses, decorative panels and glowing lamps. Interior design applications for offices, showrooms, hotel rooms, trade fair exhibitions. Of particular interest for his business is the option to print and reproduce his extraordinary photographs of water effects on plexiglass. 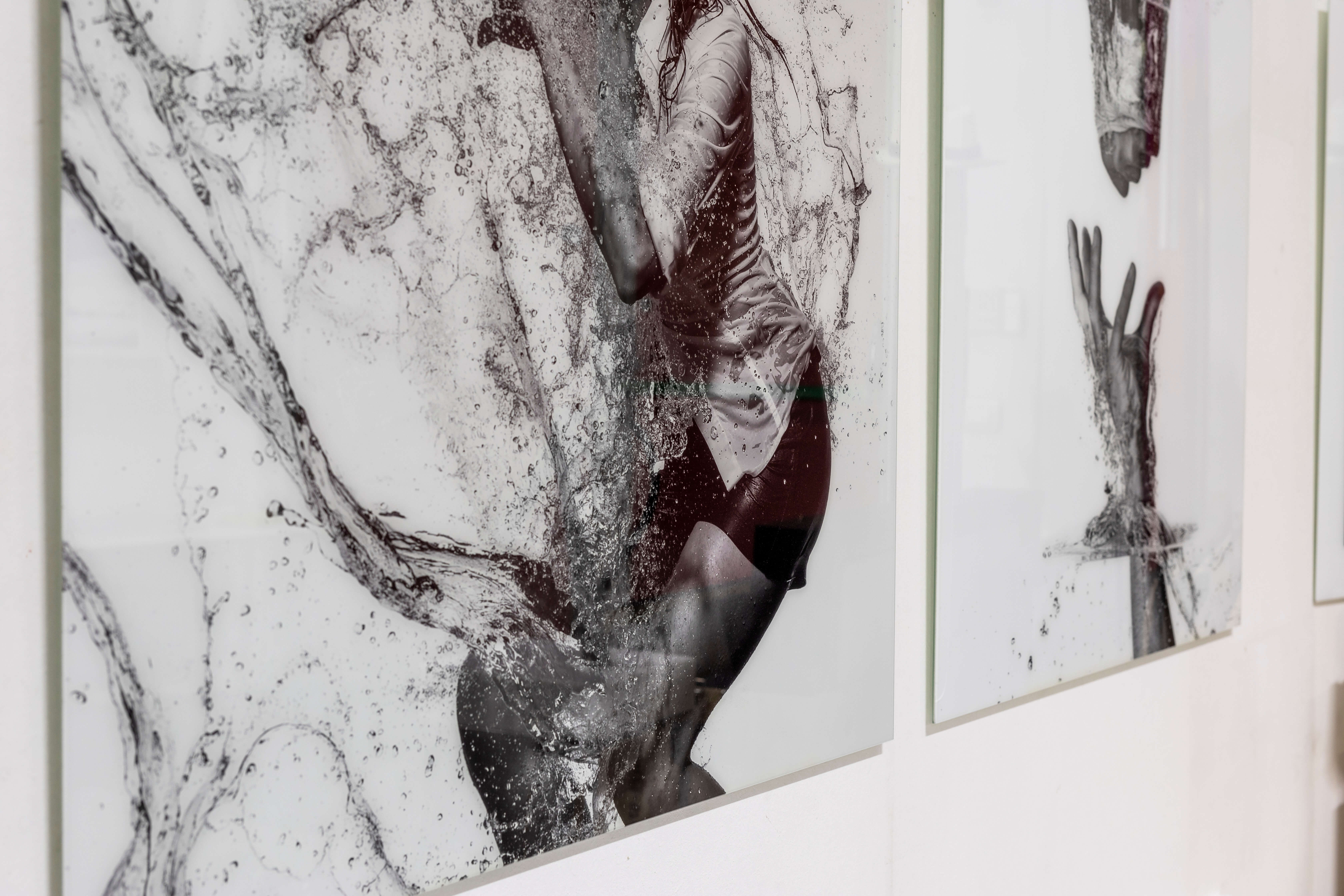 A UV print of a Walter Zerla photograph on plexiglass panels.

“I can freeze the water while it is falling on a model's skin and portray it via the transparency of the plexiglass.”

During our visit, Walter Zerla also focuses on Roland's technical support, which is essential when it comes to getting the most out of the device's potential. In this regard, he emphasises how happy he has been with the support. This isn't just because of the knowledge and experience that Roland’s technicians have. It's also because of the positive connection that grows between people who are passionate about visual communication. This is something that goes beyond mere sales and encompasses Walter's satisfaction in seeing his works reproduced exactly as he intended. 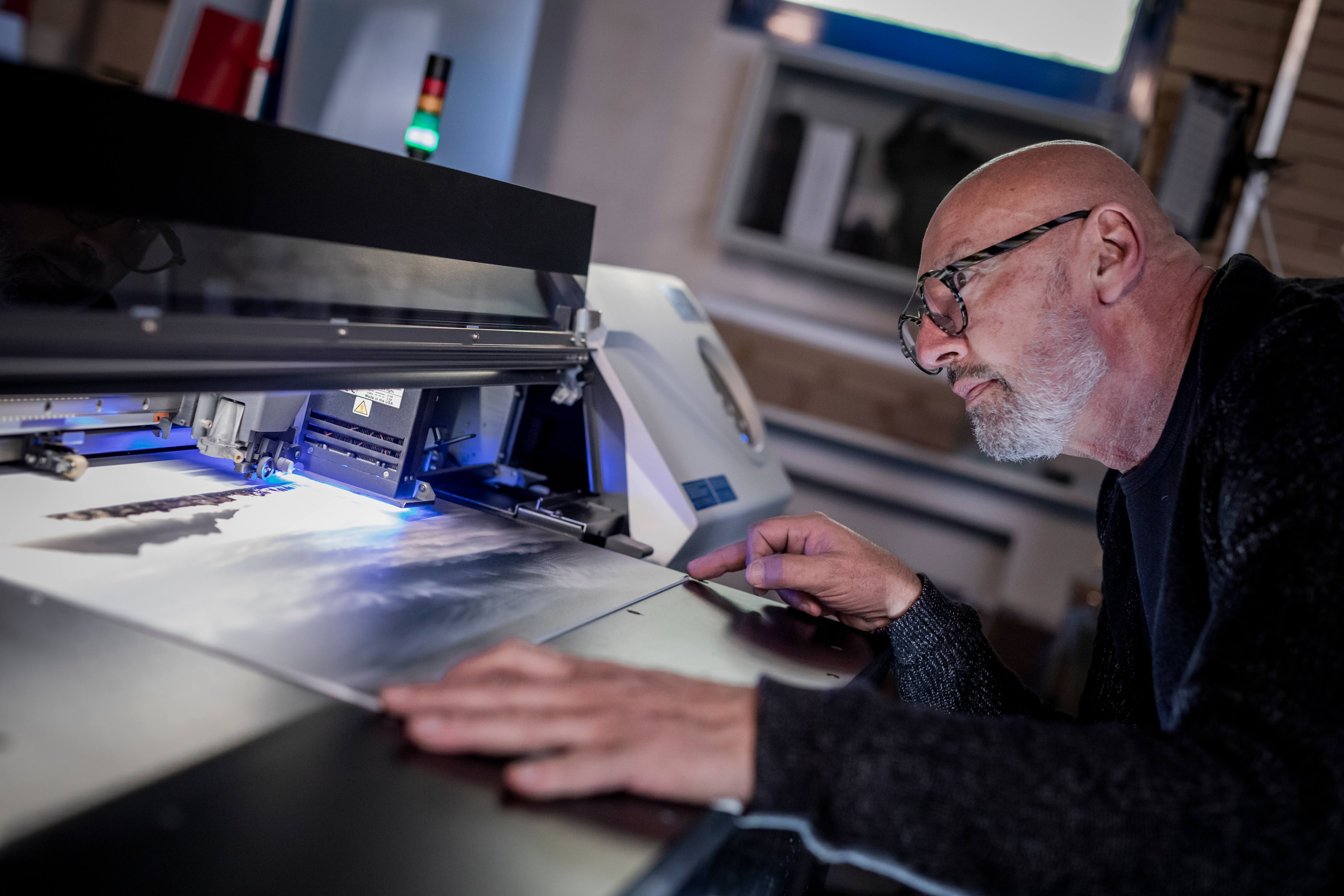 The photographer checks the colour rendering of the print, done with the VersaUV LEC-2.


“This technology has allowed a novice user like me to achieve incredible results right from the start.”

This Roland S-Series devices can immediately print onto a wide range of surfaces and objects up to a thickness of 20cm, allowing Walter to seamlessly move into multiple sectors, expanding his business opportunities into areas that were previously unthinkable. Finally, the photographer bids us farewell with an interesting thought:

“Ultimately, the greatest satisfaction is creating real windows into environments, giving them new life thanks to the quality and beauty of the images obtained using a Roland printer”.